Contemporary town of Drohiczyn, situated on a bank of river Bug in Podlaskie Voivodeship (eastern part of Poland) is a small town with population of 2,000. Its current importance is just a reflection of its past glory. The town was founded probably in the 1st half of the 11th century by Yaroslav I the Wise, Prince of Kiev, as a bordering Rus stronghold. It was build on the site of a prior early medieval “tribal” settlement (7th – 10th century). Soon it gained a considerable importance as a trading center and became the subject of rivalry of Rus’ and Masovian princes. For a few years it was a seat of the Dobrzyń Knights. In 1255 the coronation of the first king of Rus – Daniel of Galicia, celebrated by papal legate, Opison, took place in Drohiczyn. In the 14th century it became the part of the Grand Duchy of Lithuania. In 1498 Alexander Jagiellon Duke of Lithuania located Drohiczyn on Magdeburg Law. In the beginning of the 16th century it became the capital of Podlaskie Voivodeship, the part of the Kingdom of Poland since 1569. Since the mid-17th century Drohiczyn suffered a slow decline. During The Secon Northern War passages of Swedish and especially Transylvanian troops by Rákóczi caused destruction and considerable depopulation of the town. However, it was in the 2nd half of the 17th century and the beginning of the 18th century, when a number of impressive Baroque buildings were erected in Drohiczyn, including: St. Mary’s church with Franciscan monastery (raised on the site of older, 15th century church), a massive complex of Jesuit college and monastery (after dissolution of the Society of Jesus the complex was succeeded by Piarists) with Holy Trinity church (built in the place of a preceding parish church), and the church and monastery of Benedictine Sisters. Decline of Polish-Lithuanian Commonwealth sealed the process of town’s collapse. Bug river became borderline between Prussian and Russian parts (and subsequently between Imperial Russia and “Congress Kingdom”), splitting the town into two parts: northern (so called Drohiczyn Lacki – Polish Drohiczyn – contemporary town) and southern (s.c. Drohiczyn Ruski – Rus’ Drohiczyn – today in decline). 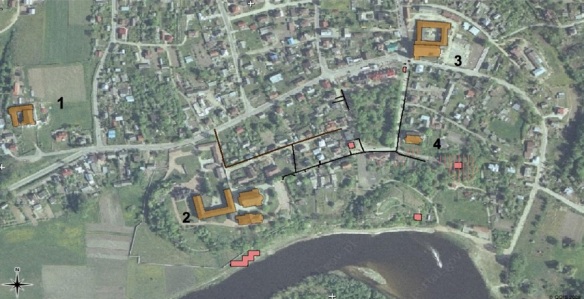 Archaeological research in Drohiczyn was initiated in the 19th century by Konstanty Tyszkiewicz who examined seals made of lead which were found in large quantity on the bank of river Bug. The research was continued by Russian researchers: K. Bołsunowski i N. P. Awenarius, as well as Z Szmit in inter-war period. Wide-range, first fully professional research was conducted by Krystyna Musianowicz et al. in the 50s of the 20th century. The research was concentrated upon relics of early-medieval town with remains of the castle on the Castle Hill, as well as traces of colonization in the so called western settlement (west and west-south from the former Jesuit monastery) and eastern settlement (north-east from the Castle Hill). Later, until the 90s of the 20th century further research (mostly of emergency character) in Drohiczyn was conducted by K. Burek, K. Bieńkowska and J. Maciejczuk from the Museum in Białystok and A. Piotrowski from the State Archaeological Museum in Warsaw. The research was again predominantly concentrated on the remains of the early-medieval town.
In 2006 in connection with installation of new sewage system in the area of Drohiczyn, emergency research was conducted. The research enabled comprehensive recognition of stratigraphy in the historic centre of the town as well as delivered valuable information and made it possible to attempt to reconstruct the town, in following phases:
1. early town (11th-15th century) developed around the castle – the center of authority and military power, with Orthodox church of Virgin Mary. The town spread on both banks of river Bug. The northern part of the town which was examined more deeply, was defended with a moat system (7 meters or wider) from the north side. Both housing structures and traces of production (i.e. metal) were found there. Numerous movable sources/objects suggest Rus character of the town’s culture, with strong West European influences (from the area of Poland).

2. modern town (15th-19th century); receiving of the German Law probably caused limited modifications in the town’s topography. North of the moat line a new square (founded on the area where traces of intensive prior colonization were not found) was probably marked out. South of the moat system a prosperous settlement was revealed, though its range was decreasing at that time. Propably as late as in the 2nd half of the 17th century an outline of the town square and Baroque composition axis (which is still noticeable) from the square’s south-western corner, uniting the square with Jesuit church, was demarcated.